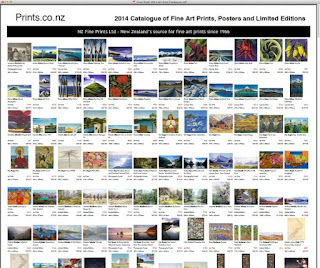 We have completed the difficult but enjoyable task of selecting and cataloging just over 500 fine art prints, posters and limited editions for the next New Zealand Fine Prints free mail order catalogue.

Here is a sneak peek at our 2014 catalogue in PDF form (although we have compressed it to 8MB it will take a few seconds to download).

Printed free versions of this catalogue will be available from early July. Please let us know if you spot any errors before we send this final draft off to the printers!
No comments:

New Zealand's most successful art publishing collaboration of the past two decades is coming to an end.  We have been told by Christchurch publisher Image Vault that immensely popular contemporary NZ landscape painter Grahame Sydney is withdrawing copyright permission to reproduce his paintings digitally (so called giclee printing) and we understand that other editions previously available as off-set only will not be re-printed once these sell out.  This affects several popular titles immediately that are printed digitally - including Nighthouse II, Evening at Ben Ohau and Albatross at Deborah Bay which will no longer be available once our stock on the shelf is sold - and the other titles will progressively be discontinued by NZ Fine Prints as the publisher deletes them.

This marks the beginning of the end of one of the most successful publishing relationships in our industry's history as for several of these past few years Grahame Sydney was the top selling NZ artist for New Zealand's galleries, picture framers and other retailers selling prints.

Grahame initially self-published prints in the late 1970s - reproducing his paintings Rozzie at Pisa,
Dog Trials Room, Auripo Rd and Wilson's Boys Boat [when you see an interior shot of Sydney's house on television or in a magazine the image of Rozzie at Pisa on the wall is actually one of these prints - the original is in the national collection at Te Papa!].  The first editions in the Grahame Sydney series from "Image Vault at Windsor Gallery" date back to before the time the Secker's sold the gallery to concentrate on printing and publishing under the Image Vault brand.  The "Grahame Sydney Series" (that eventually numbered prints of over 50 different paintings) was one of the foundation publishing projects of Jane and Nathan Secker back in the days that they still worked at the family owned Windsor Gallery in High St, Christchurch. This writer remembers collecting bundles of these first prints wrapped in brown paper after climbing the narrow stairs to where the Secker's embryonic publishing company occupied a warren of small rooms above Windsor Gallery in an old building now demolished following the Christchurch earthquakes!

Tens of thousands of Grahame Sydney prints were sold during the late 1990s and the first decade of the 2000s with Grahame's original paintings climbing in value as well in no small part due to the wider appreciation of his work that large scale reproduction delivered. Grahame's contemporary realistic (but, he insisted, never photographic!) scenes fell comfortably into the tradition of New Zealander's decorating with landscapes devoid of people but with their modern more lightfast inks and large format they showed a clear technical advance from prints printed in NZ in the 1970s and 80s for print purchasers (until Image Vault began printing using wide format inkjet printers in-house all the Sydney prints were printed using off-set lithography by Christchurch's Rainbow Print).

The Sydney series was a publishing milestone - the first time that a single contemporary NZ artist had had such a large number of paintings reproduced and simultaneously released as art cards, mini prints etc. It also marked a change in the distribution model to a complete framed product being sold into non traditional retail outlets such as gift and furniture stores rather than unframed prints via small owner operated frame shops ordering for customers via catalogue.

We will certainly miss stocking prints by Grahame Sydney but we'd like to take this opportunity to offer our congratulations to the artist, publisher and printer for creating one of the most successful art print publishing partnerships in our industry's history. Well done!

Illustrating this article are the first three Grahame Sydney prints that we have had to move into our "endangered" gallery today (our collection of prints about to sell out) - we have between five and twenty copies of these titles left in stock today (early June 2013).  As always please order promptly to avoid disappointment as once these prints have sold they will not be available to buy again.