Auckland printmaker Shane Hansen has recently completed some new editions which is exciting news for collectors of contemporary NZ original prints.  Artwork from the high profile Maori artist  has been purchased in prestigious private commissions such as Air New Zealand's Koru Lounge at Auckland International Airport and a recent painting was included in the landmark Ngaa Pou Whenua show at Waikato Museum in 2011.  Hansen's new work is building on a solid back catalogue of sold out print editions including his Friendy tiki series (Pania, Boy and Friendy et al on vintage wallpaper) and screenprints on plywood Te Kereru, Kokako & Aroha, Te Kea Aoraki etc.

Shane Hansen - who is of Tainui - Ngati Hine, Ngati Mahunga descent -  says about his new prints "The detail of my mahi [translation from Maori = work, to make], is in its simplicity. Keeping details to a minimum to acheive an image of high impact, depth and meaning is a challenge but I feel the work is stronger because of it. The term less is more is definitely the case with my work and it doesn't mean it is less meaningful."

Waitakere Wairua [translation from Maori = Spirit, Soul)
Based on an artwork for the ‘Living & Learning Centre’ in Henderson, West Auckland. This print represents the cultures, lifestyle and spirit of the Auckland area and also the people that inhabit it. In this print Shane tells us that "The Kokako is a kaitiaki (Maori = "guardian"), watching over the Waitakeres, helping forge a brighter future for the tamariki (Maori = Children). Looking down from the Waitakere ranges towards Rangitoto, the Kokako feels proud and privileged to be part of it all." Archival giclee print in an edition of 35 signed and numbered by Hansen.
Ataahua Tieke (Gold)
Hansen says that this print was inspired by an encounter he had with the unique NZ saddleback (tieke),"The handsome saddleback greeted me with surprise in his eyes", he told NZ Art Print News, "The bird seemed to be saying 'Who is this who seeks my attention? You have come, so I will go.'" Tieke belong to the Wattlebird family which includes the kokako and the (extinct) huia. In Maori the word Ataahua means beautiful. Ataahua Tieke is available in two colourways, green and gold (the Gold edition is shown here) in editions of 35 prints. 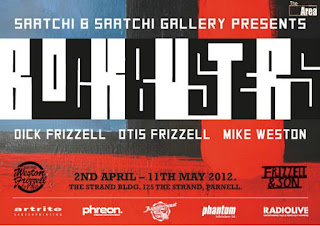 A promotional screenprint has been released for the "Blockbusters" exhibition of new work from Frizzell and Son (Dick and Otis Frizzell) and Weston Frizzell (Otis Frizzell and Mike Weston in collaboration).

In the vocabulary of graffiti art the term Blockbuster refers to a piece where one word occupies the entire wall. The outlined text is predominantly defined by the blacking out of the gaps and negative space. Parasitic of the underlying work, a BLOCKBUSTER envelopes and consumes the surface.

A Blockbuster is also the biggest thing of the summer, the thing everyone has to see.

The Blockbusters screen print is large (A1 size) numbered and signed by Dick Frizzell, Otis Frizzell and Mike Weston.

Retro or Vintage? How do we classify prints?

One of my jobs as the catalogue manager at New Zealand Fine Prints is sorting the latest prints into categories - because we want our customers to quickly and easily find the prints they want to buy when they visit NZ's largest art print shop. We don't expect our customers to always have in mind the exact artwork they are looking for when they start shopping at NZ Fine Prints. If a buyer has a specific print that they are searching for (or are only looking for prints available by a particular NZ artist) - then it's straightforward to search by keyword or alphabetical listing by artist surname. Although we do have a master gallery of all prints in stock at NZ Fine Prints listed in alphabetical order by title we spend a lot of time thinking about how to thematically link prints so that buyers can easily slip into a rich vein of art that is exactly the sort of thing they are looking to buy without having to trawl through every one of the thousands of prints in stock.
Unlike books which come already classified by the publisher and easily organised using the Dewey decimal system prints can be organised easily by artist/photographer/printmaker and by type (such as lithographs or prints on canvas) and by period but much less easily by topic than you might think at first glance. This has been shown recently when trying to decide how to categorise a series of pictures from New Zealand painters and designers that are clearly not contemporary in a fashion forward interior design sense but are a contemporary artwork that

is referencing or remixing kiwi culture and especially kiwiana icons. I didn't feel comfortable selling these modern designs such as "Ski NZ" by Image Vault's Paul Ny pictured here alongside the real deal (eg prints of actual work by early NZ graphic designers such as Leonard Mitchell and Marcus King) in case buyers thought we passing them off as genuine historical designs. So we have decided to re-organise the images into two galleries, retro and vintage.
What is the difference between the retro and the vintage collections at NZ Fine Prints? We have decided that vintage means old, classic and authentic. Retro has two meanings in art and design. It is often used as a shorthand to describe a design period more recent than vintage, for instance mid twentieth century furniture such as your grandparents formica table is retro. However we have decided that the second usage of the word to describe contemporary design that is looking self-consicously back to an earlier period (as in the "neo-deco" retro style of designers Terry Moyle and Rosie Louise from NZ's Contour Creative Studio) is a more useful way of categorising the modern prints. Our retro collection is therefore the home of modern designers and artists working in a retro style such as Contour Creative Studio, Paul Ny and kiwiana art specialist Jason Kelly. Whose style could probably also be called "old school", now that makes me wonder if compiling an "old school" collection is a helpful idea as well…
1 comment:

Flags are a potent national symbol for artists to reference, recycle and re-imagine. Consider Jasper Johns "3 Flags", Jimi Hendrix's "Star Spangled Banner", or closer to home Otis Frizzell and Mike Weston's controversial re-imagining of the NZ Flag as redesigned by a blast from Tame Iti's shotgun. The official NZ ensign has featured in prints such as the relatively straightforward Timo Rannali Aotearoa/NZ Flag print with the words of our national anthem (God Defend New Zealand) in English and Maori superimposed and a more unusual juxtaposition of the flag with a John Dory fish by Auckland printmaker Brad Novak. There are ongoing campaigns to re-design the New Zealand flag to eliminate the Union Jack, most recently a competition was promoted by the late Lloyd Morrison but none has attracted as much long term support as the alternative NZ Koru flag designed by Friedensreich Hundertwasser.

Hundertwasser (1928 - 2000) was one of Austria's most famous 20th century artists also known for his building designs which eschewed straight lines in favour of more organic forms. Hundertwasser visited New Zealand from 1973 and eventually lived here until his death in 2000. His Koru flag is the only non-print that we stock here at New Zealand Fine Prints, because of its importance in our design history we decided we had to have it for sale and it has sold steadily for over ten years now in two sizes, medium and large.
Recently we re-discovered the original long manifesto by Hundertwasser "A Flag of our Own" bundled up with a box of flags. Here it is:
Proposal for a second flag for New Zealand, which represents an unmistakeable identity that combines New Zealand’s age old heritage of nature and the heritage of Maori history with the growing future of a new nation.
The flag symbolizes old and new, history and progress at the same time. This flag symbolizes peace, but not weakness, but the strength of creation moving forward in a courageous engagement.
At a moment in human history with increasing environmental concern New Zealand gives an example to the world because this flag represents peace with nature, human development in harmony with nature. It is the sign of understanding with this everlasting powerful ally. This flag is a symbol of a new age, a big step towards mankind’s responsible evolution.
The fern’s green spiral on white or silver ground starts at the black flagstaff lead taking up the whole width of the flag first decreasing gradually, dividing the flag into diagonal halves, then curling up in to a spiral at the other end of the flag.
The spiral unfurling in a rectangular flag is the image of union of nature and technology, of round and square.
It seems as if the flag contains another flag advancing, streaming, unrolling and opening up in a strange and mysterious wind, a flag which is transformed into another dimension.
It is an image of how matter concentrates and turns into life. Quantity is transformed into energy. It is a symbol of the never ending cycle, a symbol for ever renewing life.
The green is carefully composed of the special earthy deep, lush and fertile greens of the New Zealand bush and farmlands, not occurring anywhere else. This green is the wealth of New Zealand.
The Maori spiral and the sprouting fern symbol combined, the koru, already represent New Zealand in many fields like for instance the Air New Zealand sign.
This flag is unique and cannot be mistaken for any other flag, as is the case with the present flags of New Zealand and Australia, and the flags of many other nations. A recent example of how a symbol was accepted to represent a country with an identity quest similar to that of New Zealand is the maple leaf in the flag of Canada. In Australia too, efforts are undertaken to find a new flag. Let New Zealand be first.
May New Zealand be part of the nations with a beautiful and meaningful and unique flag.
It is an intelligent flag full of joy, it is indigenous, it contains a message, it has a purpose, it is different. It holds the mystery of this remote land. It is a flag to love because it is special, a flag to identify with.
Like a fern sprouting, like a wave of nature, like a flag unfolding.
It is a proud symbol of this nation, representing Maori history, representing the green land and the long white cloud, a true messenger of New Zealand to the world, independent, strong, invincible, full of life and energy, unmistakably New Zealand, a flag of future and age old identity.
This second flag for New Zealand is in no way designed to detract from the Union Jack, the Southern Cross, the British monarchy, the Commonwealth, the British heritage and New Zealand traditions. The fern flag will fly happily together with the official Blue Ensign. It signals that New Zealand has come of age and qualifies as an equal among the nations of this Earth. The koru ensign symbolizes the love of New Zealanders for their country.
Bay of Islands, the 18th of March 1983.
The proposal for a second flag for New Zealand is a beautiful insight into the designer's thinking and the powerful symbolism of the design. Especially interesting to read that Hundertwasser was not actually proposing to replace the official Blue Ensign with the Koru flag.
No comments: