Sometime in the last few weeks NZ Fine Prints passed our target of having over 2000 different prints by NZ artists, painters and print-makers in stock by Xmas 2010.  Being somewhat distracted by the September 4 Christchurch earthquake this milestone actually passed unnoticed until a visitor to our office asked our gallery manager exactly how many different NZ art prints we had!

Unfortunately we now can't establish exactly which print was the actual 2000th print because every day we are also subtracting prints and posters from our stock as editions sell out which makes this hard to calculate.

However our best guess is that it was probably one of the cool new Contour Creative Studio retro posters (see their poster celebrating the fabled flying boat "Coral Route" from New Zealand to the Pacific at left) - the collaborative studio of artists Rosie Louise and Terry Moyle whose unique creations combine an art deco poster design ethos with NZ history in a unique retro style.
1 comment:

Rumours circulating on Facebook about a sensational auction on eBay for a lost Colin McCahon painting which sold for a mere fraction of its worth back in 2006 have been confirmed by people close to the story today - but the mystery of how the painting returned to NZ remains.

Shown here is a screenshot from the auction on eBay "Colin McCahon Bellini II Enamel Paint on Hardboard No Reserve" with bidding at a mere $US199.99 just four hours before it closed with a winning bid of just $US 4500 - approx $NZ6500 today.  This is the deal of the decade for a NZ painting considering Colin McCahon currently holds the record sale price for a painting by a NZ artist with a top price paid of just over $1.1 million (for Let Be, Let Be in 2009).  However the excitement didn't stop when the auction closed as the vendor refused to hand over the painting to the auction winner - Auckland tribal artifact collector Andrew Pendergrast.  Pendergrast claims "someone must have offered [the broker listing the painting on behalf of the vendor] some cash to disclose the vendor's name" because despite the vendor's agent being forced to refund $1000 in currency conversion fees and Pendergrast significantly increasing his offer "no matter what I offered the vendor had uplifted the painting from the broker and there was nothing I could do to change his mind".

Mike Weston, of Auckland pop art studio Weston Frizzell, who today admitted via email to being the unsuccessful underbidder on the auction would not say how he first heard of the auction but said he "watched for a few days and it seemed to have gone un-noticed - I couldn't sleep". Weston inadvertently got locked out of the auction at the last minute due to bidding an auto bid amount over the unregistered buyer limit - "If I'd bid only $10k [instead of $50k] I would have got it" says Weston ruefully.

The painting, shown here at right, is one of Colin McCahon's Bellini series, and almost certainly from the group of 19 paintings purchased by the American collector Edward Danziger from Auckland's Ikon Gallery in the early 1960s. According to McCahon expert Martin Browne who tracked down Edward Danzinger in the 1990s there was "definitely at least one missing Bellini Madonna painting" even after Brown's time-consuming detective work managed to reveal the whereabouts of two more Bellini Madonna paintings along with at least another half a dozen McCahon artworks that had previously been part of Danzinger's collection.  Although Browne would have to sight the painting in the flesh to confirm his view on its authenticity he says that there was a painting referred to as "The Second Bellini Madonna, 1961" shown in Contemporary New Zealand Painting at the Auckland Art Gallery in November December 1961 and "there seems a good chance that the eBay one may be it". According to Browne in all probability "someone got themselves a bargain".

Prominent New Zealand dealers and galleries approached for comment would not say if the painting had been purchased by them, one Auckland dealer summed up their collective response - if it were them "that would be confidential information" which they would not divulge.

Please leave a comment below or call the writer at New Zealand Prints if you can help solve the mystery of who was the successful purchaser and how they managed to get this long lost Colin McCahon painting back to NZ.
4 comments:

All new art print orders placed via phone or Prints.co.nz have been shipping as per normal since Friday 10th September. Thank you to our dedicated warehouse team who have worked over the weekend to catch up on the backlog of orders placed after Saturday's earthquake, the last of which were delivered to the couriers at 1pm today.   An especially big thank you to all our customers who have been so patient with the unavoidable late delivery of their prints & gifts during the past very difficult week as we worked to stabilise the damaged gallery exterior to make it safe for our warehouse staff to pack your orders.

Picture framing delayed by last week's quake is due to be completed by Wednesday and delivered to customers throughout New Zealand by Friday 17th September. 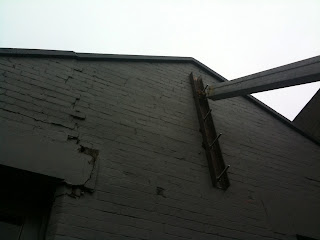 All of us at New Zealand Fine Prints would also like to thank the owners of the neighbouring properties in Hereford St - Kay Fisher of 198,  Lewis & Barrow, Joe's Garage, Miles Construction and Calendar Girls who gave us alternative safe access to our gallery via Liverpool St across their properties without question.  Also thanks to Colliers International & Canterbury Development Corporation who allowed our engineers and construction team access to their carpark to place the supports for the rear wall of the gallery.  And to Ben & the guys at Leigh's Construction who managed to place four huge supportive braces and steel beams into our building (see the photo!) without damaging a single artwork - you are amazing!
No comments:

As of Wednesday 8 September New Zealand Fine Prints is up and running from temporary offices out of the inner city.  You can contact us via our usual telephone numbers and email is also working again. Initial emergency stabilisation work on the gallery and adjacent building is due to be finally completed within hours. Huge thanks to our engineers, Anne MacKenzie of Buildgreen who was there for us when we needed it the most in the first few hours,  John Tait from Lewis Bradford and the guys at Leighs Construction. Also big thanks to our near neigbours in Hereford St Arrow International whose team dealt with the immediate dangers from the collapsing gables and put a temporary cover over the holes just after the initial quake to help keep all our thousands of prints snug and dry.

Our first post-quake shipping day is not going to be set until we are certain our staff are going to be safe in and around our gallery - especially in light of the continual aftershocks that have brought down already unstable buildings across the city today.  We are contacting all customers individually, please be patient while we arrange delivery of your orders made since Saturday's earthquake. We expect to update the revised shipping date Thursday around 3pm.  All NZ Post and CourierPost services are running again, we just have to be absolutely sure our gallery is safe for staff working to send out your order.
No comments:

All New Zealand Fine Prints staff and their families are ok. Our gallery is in the badly affected centre city area but from the outside our gallery appears to have sustained relatively minor damage.  Our warehouse manager was able to access the building briefly on Saturday and reported that our print stock has miraculously remained on the shelves and no damage to any prints was immediately apparent.  We seem to have been very fortunate compared to many other businesses.

At present we are unable to access our gallery due to the ongoing assessment of potentially unstable buildings immediately adjacent to us.  We anticipate we will be able ship orders received since Friday 3 September on Wednesday and delivery times both within New Zealand and to overseas addresses should still be within the target range of 3-5 working days nationwide - ten days worldwide.
No comments: