Who is Milton Springsteen?

Back in 2009 street art wasn't an art movement that NZers were particularly familiar with, we knew about graffiti (and that in general this was a bad thing) and I wasn't sure what to call artworks that were on the street before they were prints (aerosol art anyone?).  This began to change with the phenomenal rise into popular consciousness of the British street artist Banksy, and American artist Shepard Fairey's Hope poster for Barack Obama which became the enduring image of Obama's first campaign that is now symbolic of the mood behind the election of the US's first African American president.

But the rise of popular awareness and widespread enjoyment of street art in New Zealand can probably be traced to the efforts of one man in that year, George Shaw, and this started with the first Oi You Festival of Street Art held in Nelson in 2009.  When Oi You moved to Christchurch post earthquakes (as Rise) this turned into the most popular art exhibition the city had ever had and changed the face of Christchurch city forever.


Arrival of the artist known as Milton Springsteen

One of the intriguing names associated with the street art festivals was Milton Springsteen.  This anonymous artist created artworks known as the "Corrupt Classics", these paintings were also available as limited edition prints which sold briskly to festival goers as well as being stocked here at NZ Fine Prints.  We rapidly sold out of these editions - although a couple took a while longer to sell out (a riff on Van der Velden's Otira Gorge series did not not have the same immediate appeal as a re-working of NZ's most popular painting).

When the prints sold out my inner journalist got the better of me and I decided to see if I could find out who Milton Springsteen actually was once and for all.


On the trail of the artist's identity

Customers assumed we would know the artist's identity but kept it a secret, however we never dealt with the artist directly, the prints were sent to us from Nelson or we would pick them up from George who stayed at the YMCA in Christchurch while the street art festivals were on.  We had profiled who we thought might be the kind of person who would have the appreciation of NZ's art history as well as the artistic skills to recreate paintings in the style of Bill Hammond or Colin McCahon but although we thought we knew at the time who Milton was there was no name attached.


But should we tell who it is?

It was lots of fun playing the amateur art sleuth and eventually I was pretty sure that we have our guy (yep, we think Milton is male).  But then just as I had got to the bottom of the mystery this week a customer happened to ask us point blank via email if we knew who Milton Springsteen was - and at that moment I realised that although it was a hoot to track him down would revealing who it is spoil the fun once an owner of one of his prints knows the artist's real identity? And aside from that I began feeling nervous that revealing who the artist is would A) annoy George Shaw who we think has been a tremendous force for good in the NZ art world and B) Cause Mr Springsteen any sleepless nights for no good reason. 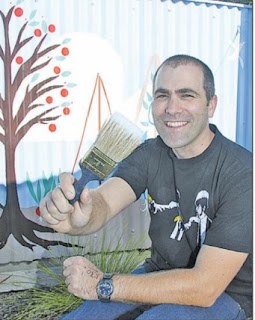 So as with any moral dilemma in the modern age we decided to put this to the vote.  Putting a poll on our Facebook page and on Twitter, 100% of votes cast were to reveal the artist's identity, but the small number of votes meant this wasn't very helpful at all!

And then it came to me, we can reveal who we think Milton Springsteen is without spoiling the mystery of his actual identity.  And here's how we can do it. We think this person is Milton Springsteen.  Are we right?