Today we are going to help our readers differentiate their Frizzells! Confusion often arises about NZ artists carrrying the Frizzell name.  For instance because we stock all three different strands of Frizzell art prints at NZ Fine Prints we get asked questions like "Is Weston Frizzell the brother of Dick or Otis?".  Which is perfectly logical but not quite right!

Here is the explanation. Dick Frizzell (1943 -       ) - shown here standing in front of some of his recent paintings (in what we suspect is also his favourite black and white striped top) has been one of NZ's most high profile and popular contemporary artists since the 1970s.  He continues to produce paintings and prints as well as recently designing artwork for The Great NZ Songbook project and even the 2011 Rugby World Cup to be held in NZ.

Dick's son, Otis Frizzell (1971 -      ) - shown at right,  is now also a respected artist in his own right. Otis found his feet artistically with more than 20 years experience as a graffiti artist and has recently been producing some of NZ's most exciting contemporary prints - such as his tiki series - but many of Otis' prints are produced in collaboration with Mike Weston under the moniker "Weston Frizzell".

Weston Frizzell (shown at left is a recent publicity shot of Mike & Otis with the official Weston Frizzell rubber stamp that appears on all their studio's work) is a collaborative pop art style studio whose slick work and tight production values have resulted in some of NZ's fastest selling print editions - buyers have snapped up entire editions such as "Tututables" in record time.  Like Otis Mike Weston occasionally completes  solo art projects that are not under the Weston Frizzell studio.
2 comments:

Famous NZ landscape painter Grahame Sydney (in his role as outspoken opponent to Meridian's proposed wind farm on the Lammermoor Range in central Otago) has been saying some interesting things in recent interviews that give a revealing insight into how he views his artistic relationship with the NZ (particularly Otago) landscape.  For instance in his written submission on behalf of the Maniototo Environmental Society to the Environment Court hearing back in 2008 Sydney wrote that "landscapes had a power and a meaning which was real, mysterious, andvital to many people's sense of identity.  They play a vital role, aesthetic, cultural and spiritual, in the lives of New Zealanders." Sydney also claimed that "Central Otago landscapes had a greater capacity to affect people's imagination than most others in New Zealand." This could be the matter of some debate as arguably many NZers relate at least as strongly to a painting of a pohutukawa fringed beach or a view of Mt Cook as they might to a landscape in Central Otago.

In another interview with the Dominion Post the painter is quoted as saying "What people don't get is that beauty does not have to be scenic majesty like mountains and lakes. There are many different types of beauty. Some people would look on this and just see bleak barren wasteland, but I see it as something unique and something very particular and special to Central Otago. I love it up here. I find it absolutely exhilarating." 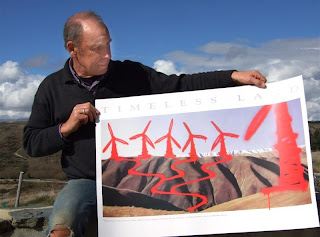 The picture shown here is Grahame Sydney with the graffiti style defaced print of Timeless Land - a 2008 fundraiser for the "Save Central" campaign formed to fight wind-farm development in the Central Otago landscapes that he loves to paint. [Photo Credit: Diane Brown ODT].  His defaced artwork was "a way of delivering the extent to which I feel the whole energy push is an insult to landscapes - especially ones I love the most, and the feeling that we have to make better decisions than this because the change to landscapes supposedly of a temporary nature, result in permanent damage, and there are better ways".

The wind farm debate is an interesting battle between the needs of business and electricity consumers and those to whom the aesthetic appreciation of a landscape is the over-riding consideration.  It is an intriguing twist in the story that artistic or aesthetic grounds would not have been made such an important factor in the opposition to the Central Otago windfarm development before the paintings of artists like Grahame Sydney!
2 comments:

Popular NZ painter Barry Ross Smith has announced he is no longer going to be making prints available of his artwork. After a very successful series of farming prints such as Lot 18 published in conjunction with Image Vault Barry and his wife Leanne began producing their own series of high quality archival standard giclee prints based on Barry's most popular paintings including the controversial "Queen with Moko" two years ago.

Barry says "We believed that there was a market for high quality reproductions that would last and give rich colour clarity. With my participation in a MFA [Master of Fine Arts] degree program, helping with the children and the production and proofing of new prints etc I have found it increasingly difficult to find the time to devote to my main inspiration which is the painting of original artworks." Ross Smith adds that finalising  the printing of reproductions will "allow time for me to go forward in my career and dedicate more time to the painting and production of original artworks."

Here at NZ Fine Prints we have made sure that we have excellent stocks of most of the Barry Ross Smith print series on hand - enough to last the next few months - but we will eventually sell out of these titles and they won't be re-printed once these editions have sold out.
1 comment: