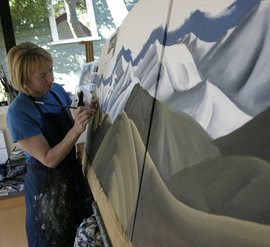 At a recent exhibition of paintings Diana Adams explored the reasons why her artwork resonates so strongly with her emotional response to the New Zealand environment.  In the promotional material for Adams' show her artistic practice was described as a having an "interest [that] lies primarily in the challenges that arise when attempting to express an emotional content in painterly form, a realm in which she excels".

A full-time painter since 2001 Adams' training critically includes a Bachelor of Landscape Architecture from Lincoln University - an education she claims led and inspired her to becoming a painter of New Zealand's natural environment. Adams’ background as a landscape architect has played a significant role in the shaping of her current style which is delineated by clean precise lines and a close attention to composition. Many of her prints also clearly demonstrate her understanding of the native New Zealand flora which inhabits the landscapes she paints - nikau palms, pohutukawa and cabbage trees feature as key elements in her compositions.

We agree with the sentiments of the curator of her recent exhibition when they write "Reflecting the artist's development into a painter of some maturity and complexity, the latest series of works investigate a range of emotions, including the darker aspects of the landscape and the often disquieting feelings evoked by the solitude and loneliness which may be found in the isolated landscapes that she depicts. All pieces possess atmospheric qualities which reference the prevalent weather conditions and resultant light effects over the landscape - approaching storms and moody skies signaling changeability and the presence of an overwhelming, oppressive power rendering humanity insignificant in the face of natural forces. This can be seen to move Diana’s work past a simple representation of the obvious beauty of the New Zealand landscape and on to a thematic exploration of the moods and emotions which can be experienced through interaction with the environment."

This increasing complexity can be seen in the latest additions to Diana Adams series of prints on fine art paper and canvas - prints of paintings like River's Journey and Sole Survivor.