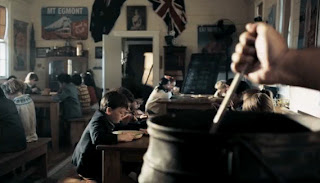 Some of New Zealand Fine Prints' NZ vintage posters feature in the new Flybuys loyalty program television commercials.  All spots in the series start the same way - with an Oliver Twist character asking for more in an historically decorated New Zealand classroom dating from the early or perhaps mid-20th century.  On the walls are our prints of vintage travel and tourism posters featuring New Zealand destinations including Mount Egmont and Mount Cook.  [Screenshot shown here - we've favourited the full ad at NZ Prints Youtube channel if you want to check it out in its entirety].

NZ Prints regularly supply prints for NZ television production companies producing drama, comedy and current affairs as well as commercials (prints from our gallery have appeared most recently in episodes of Mercy Peak - a fine selection of pre-Raphaelite art, Outrageous Fortune and our print of Dick Frizzell's Mickey to Tiki was used to illustrate an item on copyright on Fair Go). Art is an important part of set design - the process that places actors in an historical time or contemporary setting with an appropriate backdrop.  We were particularly delighted to supply a house-worth of prints from an appropriate historical period for "The Lovely Bones" filmed in Wellington by Peter Jackson.  Because we have supplied prints to film and television for decades (we even had prints behind the reception desk back in the very early days of Shortland St) if you are a producer or set designer looking for images to use we are well versed in the copyright procedure to be followed for their use.