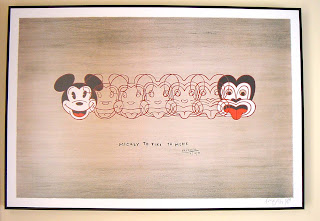 There is now a steady stream of framed pictures leaving our Christchurch gallery, the most popular being Mickey to Tiki in the black box frame (the example shown here at right is hanging on the wall of our gallery today). Since NZ Fine Prints started offering picture framing on all prints in stock we have already delivered ready framed just over 10% of the print titles that we carry. This means that we are getting a better idea of the cost of framing each print, which are the most popular prints (so we can make sure we keep these on hand) and also which colour frames are the most popular (the favourite frame colour is black because this goes with nearly all interior designs).  Picture framing outside of the pictures listed as being in stock in our framed prints collection is done to order.  Finding out more about your framing options and the cost of framing your prints is easy - just call us on NZ freecall 0800 800 ART.

Seeing all this picture framing going on has made us curious to know more about out the origins of the practice of framing pictures.  Back a couple of decades NZ Fine Prints was part owner of one of NZ's largest picture moulding manufacturers so we have been able to delve into our own company archives to literally dust off some books on the aesthetics and mechanics of picture framing in our quest to find out more about the history of framed prints (and along the way have seen a lot of changing picture framing fashions as well!).

The history of framed pictures went back a lot further than we expected. The fashion of having moveable art pictures in our homes and offices is not new, it goes back many generations. The story of the use of domestic (or vernacular) pictures has its orgins just over three hundred years ago when just over a third of "tradesmen" (i.e. semi-skilled workers) in Britain already had pictures on their walls (our source for many of these fascinating statistics is Lorna Weatherill, Consumer Behaviour and Material Culture in Britain 1660-1760).

Before the Renaissance the movable panel-painting was the exception and the painter's craft ranged over a wide variety of surfaces integrating the work full with its public and the buildings in which these skills were employed. Over door and over mantel pictures were about the last examples of pictorial art to be united inseparably with their architectural setting.

The dominance of moveable pictures, (ie "easel painting") must be seen as a product of the Renaissance for by the late seventeenth century moveable pictures, paintings and prints were to be found in many interiors. The popularity of maps, usually shown hanging between rollers, can be seen as heralding the decline of limning (the use of solid gouache) and the rise of translucent watercolour which would not obliterate the printed line. The burgeoning use of moveable pictures of all kinds is particularly evident between about 1675 and 1725. In that half century some 35 percent of tradesmen owned pictures although only 4 percent of yeoman farmers did. This could point to an urban/rural divide contingent upon the cash economies of towns in contrast to the persistent barter in the country.These earliest picture frames were usually made by the artist - picture framing as a separate profession did not yet exist. 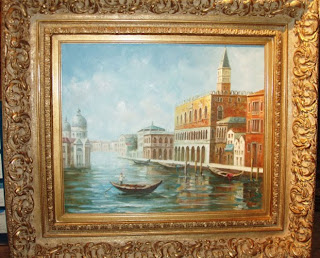 Early picture frames followed architectural practice and included a cill, as in a window, with the familiar mason's mitre. The general introduction to easel paintings by the early seventeenth century promoted the development of the picture frame as an object, not simply removed from architecture, but intended to isolate a picture from its surroundings.   The style of frame reflected the fashion of furniture at the time (see for instance the Baroque style antique picture frame pictured on the left) - this parallel between interior design and picture framing style is still strong today - many of the most popular contemporary framing styles in NZ  have strong, clean lines that reflect the trend for minimalism in our domestic and commercial interiors. This is an interesting area of uncovered ground for a New Zealand design student's thesis!

We are now enjoying researching how picture framing in New Zealand developed and will post our findings in the next article in what will be an occasional picture framing series.  We have already found that many of NZ's early artists made their own frames - a well-known example being C.F. Goldie whose distinctive style of a wide black oval wooden frame is still copied today when a print of one of his paintings is being framed.